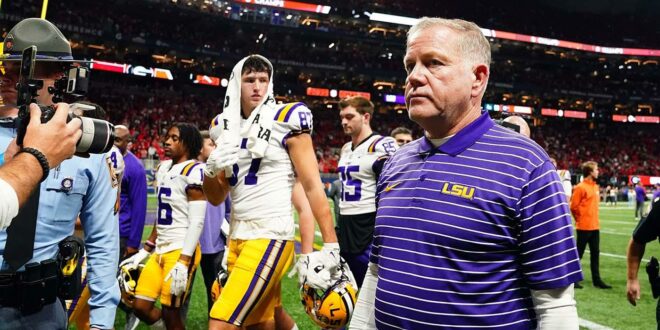 LSU coach Brian Kelly signed one of the most lucrative contracts in college football history when he was hired to coach the Tigers program ahead of the 2022 season. But thanks to some missed paperwork discovered by the Louisiana Legislative Auditor’s office, the school accidentally gave Kelly a little extra. Kelly was mistakenly overpaid by $1,001,368 across May and June 2022 because of a costly clerical error, according to documents obtained by the Greater Baton Rouge Business Report.

When Kelly signed the massive 10-year, $95 million contract, he originally organized for his payments to go straight into his bank account. In May, Kelly reached an Employment and License IP agreement with LSU to have the payments delivered directly to an LLC in his name. Unfortunately for the school, however, someone forgot to turn off the direct payments.

Ultimately, Kelly was paid twice across the months of May and June before LSU noticed the discrepancy in November 2022. Rather than have Kelly pay the more than $1 million back to the program as a lump sum, LSU and Kelly’s LLC have agreed to a reduced payment schedule that will dock his pay slightly until the amount is recouped by the end of 2023.

While LSU will recoup its money over the course of the next year, it’s unlikely many people in Louisiana are too angry with Kelly for the error. The first-year coach led LSU to its first home win over Alabama since 2010 and captured the SEC West title for the first time since Joe Burrow’s national title-winning…

Copyright for syndicated content belongs to the linked Source.
2023-01-25
nfl-news
Share
Previous Jimmy Garoppolo injury update: 49ers’ Kyle Shanahan ‘does not expect’ to have QB for NFC Championship Game
Next Is the future of Ethan Pocic the biggest decision the Browns have to make this offseason?